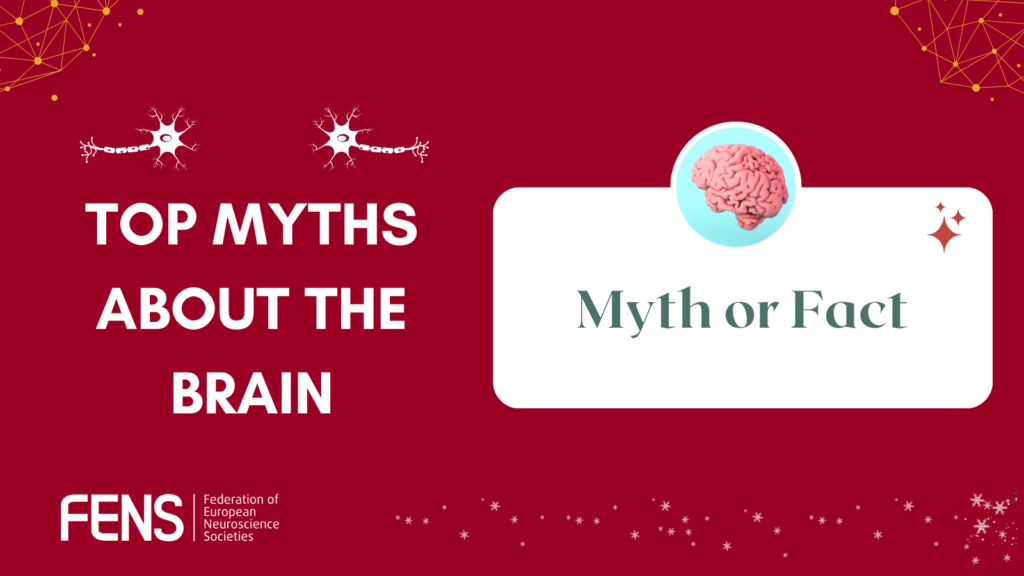 Discover 10 surprising myths about the brain with FENS!

Humans have made scientific discoveries and have shattered previous myths the more society developed. Nevertheless, science is not exempt from becoming part of urban legends and tall tales. For example, during the  Middle Ages, it was a common belief that the Earth was flat and that lightning never struck the same place twice. These ideas have been around for centuries and have been challenged by scientific evidence.

The field of neuroscience, likewise, is full of myths about the brain, and neuroscientists work daily to debunk the most common misconceptions. Despite this, some of these theories keep on thriving, mainly through media dissemination and through popular books.

Myth. The most popular myth about the brain is that humans only use 10% of their capacity, and, mysteriously, 90% is not being used. This myth implies that we have “huge reserves of untapped mental powers” and “we are using only a small part of our mental capacity”. Blockbusters like “Lucy”, popular culture and sci-fi books helped to perpetuate this idea.

Facts. Neuroscientists have developed new tools to look at brain functions and discovered that the brain, specifically the cortex, is far from not being used. Even when we are resting, the brain works (Marcus Raichle, Washington University, USA). So, there’s no rest for our brains!

We can fully trust our memory.

Facts. Our brain does not record our experiences perfectly. We modify our memories a little bit each time we think about them, so recalling an event isn’t like watching a DVD many times. It’s like seeing “A Christmas Carol” play in the theatre on multiple occasions; it will be similar but not identical each time (except for the three Christmas ghosts!). Memories are unreliable, eyewitness testimony is now recognised as a very unreliable source of evidence in courts!

The brain declines as you get older.

Myth. According to popular belief, everything goes downhill after your turn 50.

Facts. Some cognitive functions may decline when humans get older. Children are better at learning new languages than adults, you cannot avoid it. Nonetheless, many mental skills improve with age: vocabulary, comprehension, conflict resolution, and emotional regulation. These are just some of the many benefits of “owning” an older brain. Plus, there are many lifestyle factors: exercise, diet, and challenging ourselves mentally – which have been shown to slow down age-related cognitive decline, so doing things like crosswords, sudoku etc., after retirement can help keep brains in good health for longer!

Myth. If you use the left side of the brain more, you are an analytical and methodological person, while if you are right-brained, creativity is your best friend and your brain’s right side functions stronger.

Facts. While there is some degree of function localisation inside the brain, neuroscientists have proven multisensory inputs and integration of functions on both sides of the brain. For example, language and spatial information can be processed differently but simultaneously by the two hemispheres. Also,  the two hemispheres are communicating closely all the time, via the corpus callosum and other structures!

You can’t prevent a stroke.

Myth. You cannot do anything to prevent a stroke.

Facts. Several lifestyle choices reduce stroke risk factors, so if you maintain a healthy weight and diet and get regular exercise, you are already helping to prevent it. So don’t smoke, don’t go overboard with alcohol or sugary drinks and don’t only go running after Winter sales – enjoy nature!

Your brain works better under pressure.

Myth. I work better under pressure!  Doesn’t this sound familiar?

Facts. Although pressure can motivate you to work harder, it does not result in better brain performance. In fact, stress can negatively affect your brain functions and memory and even cause brain cells to die. Nevertheless, there’s a sort of “sweet spot” for stress and performance, where too little or too much stress is detrimental to performance, but a little bit leads to optimal performance. This is called the Yerkes-Dodson Law and follows an inverted U shape. So don’t put too much extra pressure on yourself, you’ll get enough from others!

Myth. Can human brains process information like a computer?

Facts. The brain is an organ, not a computer. This means that it doesn’t have a maximum capacity to store information and it does not have the ability to perform computations as a computer does. Even the basic visual perception is processed differently because brains actively interpret information. Enjoy the benefits of being human, such as dreaming of lazy Sundays!

Myth. The common belief is that you are born with a finite number of brain cells: once you damage your neurons, you cannot recuperate them.

Facts. Research suggests that the brain is “plastic” and can rewire or readapt itself in response to new learning experiences. In addition, even under certain circumstances, the adult brain can produce new cells through a process called “neurogenesis”. So don’t panic, you can still listen to Death metal!

Facts. There is no evidence to support the idea that playing classical music to babies can make them smarter. However, music, as part of an environmental enrichment process in babies, could improve neuroplasticity and cognitive abilities. Even better, try placing an instrument in their hands. It might work. It did wonders for Mozart.

We have five senses.

Myth. The human senses are only sight, smell, hearing, taste and touch.

Facts. Humans have many other ways of sensing the world and their surroundings. For example, “proprioception” is a sense of how our bodies are positioned, and nociception is a sense of pain. We also have a sense of balance, sense of body temperature, acceleration and the passage of time”. And compared to other species, humans are missing out on many other senses! So think twice before calling someone “an animal”. It might prove to be a compliment.