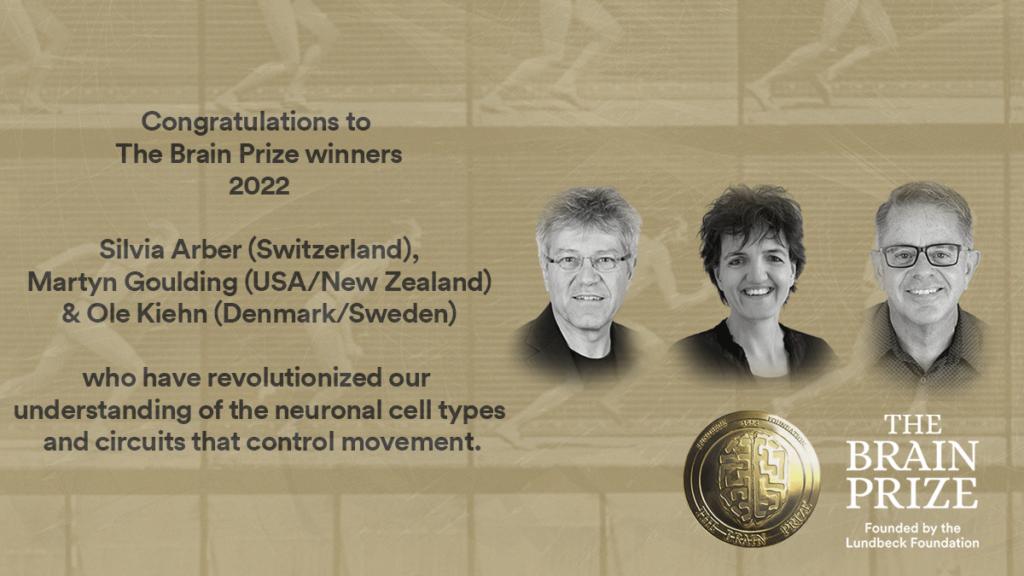 FENS is delighted to announce the 2022 Brain Prize was awarded to an international group of three neuroscientists from Switzerland, Denmark and USA/New Zealand: Silvia Arber (CH), Ole Kiehn (DK) and Martyn Goulding (US/NZ). They have revealed the nervous system’s inner workings by mapping the neuronal cell types and circuits in the brain and spinal cord that control movement.

Their work has revolutionised our understanding of how we move, research now recognised with the award of the 2022 Brain Prize – the world’s most prestigious prize in neuroscience. All our interactions with the world depend on our ability to move. Understanding how the nervous system generates movement is a fundamental goal of neuroscience and is at the heart of devising new strategies for the restoration of movement following injury or disease.

Three internationally renowned professors in neuroscience have transformed our understanding of the specific cell types and circuits that control movement.

For their groundbreaking work, the Lundbeck Foundation will award them the Brain Prize, worth DKK 10 million (approximately $1.5m, EUR 1.3m). Theirs is not only a remarkable discovery story in fundamental neuroscience, but it also highlights the need and paves the way for cell type-specific diagnostics and interventions in disorders of movement such as ALS, Parkinson’s disease, and spinal cord injury.

“The ability to move is fundamental,” says University of Edinburgh Professor Richard Morris, chair of the Brain Prize Selection Committee. “From the first steps of a baby through to the balance and agility required in riding a bicycle, movement is something we do all the time. Understanding how the brain and spinal cord control movement is a huge scientific challenge. Elegant experimental work by the three recipients has helped uncover how intentions to move are transmitted through the intricate firing of brainstem circuits all the way down to the specific pattern-generating cells of the spinal cord whose activity controls the muscles of the body including the fingers, arms and legs.”

About the Brain Prize

The Brain Prize is the world’s largest neuroscience research prize, and it is awarded each year by the Lundbeck Foundation. The Brain Prize recognises highly original and influential advances in any area of brain research, from basic neuroscience to applied clinical research. Recipients of The Brain Prize may be of any nationality and work in any country in the world. Since it was first awarded in 2011, The Brain Prize has been awarded to 41 scientists from 9 different countries. Brain Prize recipients are presented with their award by His Royal Highness, The Crown Prince of Denmark, at a ceremony in the Danish capital, Copenhagen.

About the Lundbeck Foundation