Ground-breaking research into memory honoured with the world’s largest prize for brain research.

The Brain Prize for 2016 is awarded to Timothy Bliss, Graham Collingridge and Richard Morris for their ground-breaking research on the cellular and molecular basis of Long-Term Potentiation and the demonstration that this form of synaptic plasticity underpins spatial memory and learning.

The Brain Prize, awarded by the Grete Lundbeck European Brain Research Foundation in Denmark is worth one million Euros. Awarded annually, it recognises one or more scientists who have distinguished themselves by an outstanding contribution to neuroscience.

The research by Professors Bliss, Collingridge and Morris has focused on a brain mechanism known as ‘Long-Term Potentiation’ (LTP), which underpins the life-long plasticity of the brain. Their discoveries have revolutionised our understanding of how memories are formed, retained and lost.

The three neuroscientists have independently and collectively shown how the connections – the synapses – between brain cells in the hippocampus (a structure vital for the formation of new memories) can be strengthened through repeated stimulation. LTP is so-called because it can persist indefinitely.

Their work has revealed some of the basic mechanisms behind the phenomenon and has shown that LTP is the basis for our ability to learn and remember.

Sir Colin Blakemore, chairman of the selection committee said “Memory is at the heart of humanexperience. This year’s winners, through their ground-breaking research, have transformed our understanding of memory and learning, and the devastating effects of failing memory.”

Professors Bliss, Collingridge and Morris will share the prize of one million Euros, which will be presented to them at a ceremony on 1 July in Copenhagen by His Royal Highness Crown Prince Frederik of Denmark. 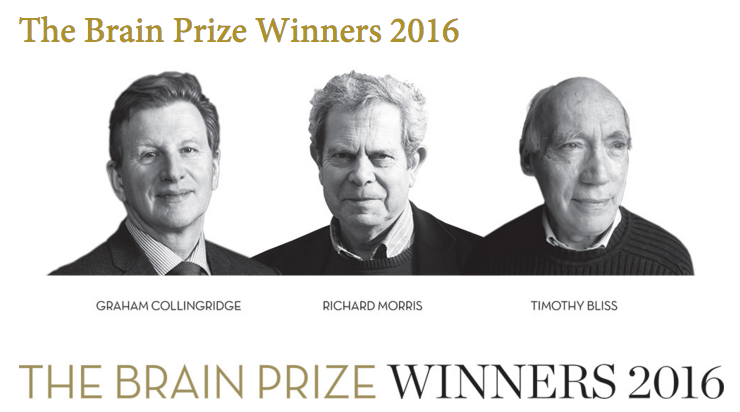